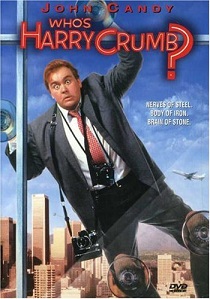 ReviewComedy
Review Article Go back to homepage
Harry Crumb is the last of great sleuthing family known as the Crumbs. Unfortunately, the talent has skipped a generation and rather than working out of the luxurious main offices he has an office in some deserted backwater.
John Candy, Jeffrey Jones, Annie Potts, Barry Corbin, Shawnee Smith, Renée Coleman, Valri Bromfield, Tim Thomerson
Comedy
1
1 Hour 38 Minutes
Thank you for supporting DVD365.net when you order using the link(s) below.
Buy DVD
Story

When the daughter of a multi-millionaire is kidnapped with a $10 million ransom on her head the 'Crumb and Crumb' detective agency is called into action. However, Eliot Draison, the president of the company is in no great hurry for the crime to be solved so he decides to bring the last remaining Crumb onto the case.

Unfortunately for Harry Crumb the family talent has skipped a generation and he's relegated to a small backwater office serving Greater Tulsa. Harry only handles the simple jobs and even then they are far and few between. Harry specialises in disguises and spends most of his time trailing unfaithful husband and wife's. However, he still manages to make a mess of these cases including photographing the wrong partner being unfaithful.

When he is called to head office he finally thinks his time has come and he can offer his unique technique to a tricky case that the police are far from happy having a private detective working on. What Harry doesn't know is that there's double crossing a foot with more than one person after the ransom, and for different reasons. So it is up to Harry to don his vast array of disguises and start his investigations. Much to Eliot Draison surprise, Harry soon starts to make important progress on the case, even if Harry doesn't realise it.

The picture is bright and colourful with plenty of detail. The bit-rate remains above average throughout the film and it exhibits no signs of artifacting or outlining. This high quality picture is certainly down to the fact the Columbia have digitally remastered both the video for this release. This is certainly commendable, but not unusual from the likes of Columbia, for a film of this age and what is a relatively unknown title.

Although the sound has also been remastered it remains as two channel stereo. The dialogue is bright and clearly audible in the front channels throughout the film and, unsurprisingly, the other channels remain unchallenged. However, for a film of this genre there is no real need for extensive surround effects and the remastering has certainly helped improve on the original quality of the audio soundtrack. It certainly out does whatever video could have offered.

The menu system is a static and silent affair with no extras of note. The only things of interest are a few production notes and some talent files which were probably just copied straight from the Internet Movie Database. What is surprising are the number of sound tracks, especially the Chinese, Korean and Thai variety and the fact that the disc is encoded with regions 1, 3 and 4. Who would have thought that this film would have been of interest to the Asian market?

I was greatly saddened by the death of John Candy as his comedy timings and expressions really did make it hard not to laugh. I don't think I could fault any of his films and his talents could even turn the most mediocre of films into something worth watching. This is definitely the case here as a relatively weak story line becomes perfect territory for Candy to use his full range of talents.

If you liked him in Planes, Trains and Automobiles, Uncle Buck or The Great Outdoors then you will love this one. It's just a great shame about the lack of extras.