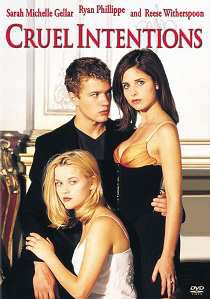 The prize in question is Sebastian gets to bed Kathryn and do anything he likes to her, since Kathryn is the only woman who won't fall for his charms, Sebastian can't resist. Unfortunately for Sebastian, if he fails he loses his beloved classic Jaguar, and the odds are stacked against him when he realises that someone has told Annette about his reputation for one-night stands.

Based on Dangerous Liaisons, Cruel Intentions is ultimately more watchable than that film, with some humour blended with sexual tension. The characters are quite complex, and those of you (myself included) that are fans of Buffy The Vampire Slayer will be shocked by Sarah Michele Gellar's character...Bitchy, spoilt and manipulative, at one point she tells a friends mother 'I turn to God when things go wrong', then when the mother leaves, she opens a crucifix and snorts drugs from it!

Sebastian is just as bad, he is also manipulative, bedding any woman he sees fit, parking his car outside the apartment where he lives which is restricted parking and waving at the cop who shouts at him! He also comes over as quite insane at some points in the film.

The picture is good to middling, with a relatively low bit rate. It should be noted though that Columbia Tri-star have included the 4:3 version of the film as well as an anamorphic print and since the DVD is multi-layered, both are selectable from the menu.

Sound is average, with very little use of surround made. Only the music can be heard in the surround channels and that's very quiet. The dialogue is fairly clear however. The soundtrack may be worth checking out, with a good mixture including The Verve, Blur and Fatboy Slim all notable in the fact that they are British talent.

Extras are excellent, with the usual crop of Deleted Scenes, Theatrical Trailers and Music Videos.

All in all, an intriguing, often amusing and very sexy film with a sad ending which is very watchable.

DVD
Get lit in the stylish ensemble caper, The Gentlemen, a star-studded, sophisticated action-comedy written and directed by Guy Ritchie, released on DVD, Blu-ray and 4K UHD 27th April 2020 from ... END_OF_DOCUMENT_TOKEN_TO_BE_REPLACED
Latest ReviewsView