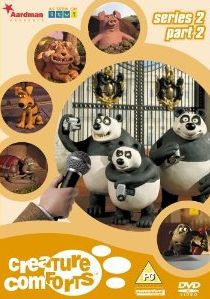 ReviewTV SeriesAnimationComedy
Review Article Go back to homepage
After the claymation of Creature Comforts launched the career of Nick Park, Frank the Tortoise and his friends are back for yet more hilarious interviews in the second part of the second series of Creature Comforts.
The Great British Public
Comedy, Television, Animation
2
1 Hour 3 Minutes
Thank you for supporting DVD365.net when you order using the link(s) below.
Buy DVD
Story

The original Creature Comforts film was made way back in 1989 and in 1990 it went on to win Aardman Director, Nick Park, his first Oscar for Best Animated Short Film. This inspired the 'Heat Electric' television commercials in which various creatures from a Tortoise to a Jaguar were interviewed "documentary style" about the merits of owning electric storage heaters in their homes. Whether these adverts caused people to rush out and buy storage heaters is a different matter. However, what they did do was to capture the imagination of the British public and the new institution of Wallace and Gromit was born.

With Aardman winning awards left, right and centre, it was only a matter of time until Hollywood came calling. And when they did, Nick Park and his company created the smash box office hit Chicken Run. Fortunately, fame hadn't gone to his head and it wasn't too long before he returned to his roots and produced another thirteen episodes of Creature Comforts for ITV. With series one and the first part of series two already available on DVD, it was only a matter of time until the remaining episodes were released onto the shiny format.

The broadcast of Series Two on ITV1 in October 2005 brought rave reviews and huge audiences in its prime time slot. At times, Creature Comforts was watched by 49% of the country's population and was ITV's most popular programme outside the established soap operas of Coronation Street and Emmerdale. Needless to say, it's a series which is as equally popular abroad and another series in the future really can't be discounted. So it was hardly surprising that the DVD release of Part One of the second series was one of the most sought after purchases of the year. It's also a greatly timed marketing ploy for the equally impressive Wallace & Gromit The Curse of the Were-Rabbit too.

You only have to watch the original Creature Comforts to see just how good the transfer on the new material is. Naturally, there's money available and it would have been foolish for ITV to even think of scrimping on the price of the contract. So it would have been a bit shock if the picture hadn't been up to scratch. The picture is superb with an above average bitrate throughout along with a wonderful level of detail and range of colours and expressions that only Aardman could ever think of dreaming up. There are also no signs of artifacting or outlining and the print is pristine with no dust scratches or other picture imperfections. It's a series that is most definitely at home on DVD.

As the series was created for UK terrestrial television channel ITV1, the sound is presented in rather unexciting 192Kbps stereo. However, considering that Creature Comforts was primarily created for television broadcast, the soundtrack was never really going to be that adventurous. With the soundtrack being dialogue intensive, there is very little, or no need for any fancy effects. Never the less, what is offered is some clear and precise dialogue in the centre channel, even if some of the sketches have clearer audio than others.

The menus are animated and scored with clips from the series with the option to play one, episodes by character or all of the episodes in one sitting. With many television based series released on DVD choosing not to use this facility, it's great to be able to sit back and watch the entire disc without having to continuously navigate through menus to get to the next episode. This is even more important when the episodes only run for ten minutes each. With the majority of the background information on the second series revealed on the previous disc it was going to be hard to find additional information for this second disc. Never the less, you would have thought that a bit of forward planning would have been a good idea as the extras on this release are rather substandard indeed. Another downside is the lack of a subtitle track.

The main extra is the twelve minute Animated Conversations featurette. It initially sounds like some welcome interviews with the people behind the voices, but it's actually a featurette looking at the various animators at Aardmans studios as they struggle with the clay characters and show how some of the blue screen items were filmed. Whilst it's ultimately an interesting feature, I still felt that it took a little shine off the series as it looks like the only thing Nick Park draws these days is his pay cheque.

The rest of the extras are a little disappointing, although children may find the collection of drawing which can be printed out and then coloured in a little interesting. There's also a number of desktop wallpapers (which can also be downloaded from the Creature Comforts website). The final extra, if you can call it as such, is some information and an internet link to some downloadable Creature Comfort games for your mobile phone. However, when I visited the site it said that the games weren't available, although I would hope that by the time this second half of the series is released the site will be active.

Creature Comforts is an absolute hoot to watch and just goes to prove that the British still know best when it comes to comedy. With the superb animation (is it really just stop-go clay animation?), the various goings on in the background and the wonderfully unscripted stories from the general public, I don't think I've laughed so much in ages. I thought it would be hard to beat, but this disc is miles better than the first in the series and it can be watched over and over again without getting bored. And it's not very often you can say this about any television series or film.

Whilst the lack of extras really do take some shine off this disc, it's the actual programme content that more than rescues the disc. In fact, I'd still be raving about it if it didn't come with any extras at all. So it's all set for an evenings worth of side splitting laugher and by bringing back Captain Cuddlepuss and Trixie, Brian and Keith, the perpetually depressed (and highlight of the series) Fluffy the hamster along with piles of new characters you'll be laughing for days. Highly recommended.