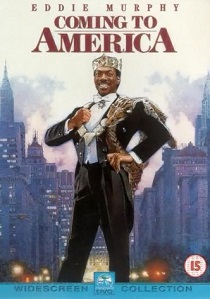 Prince Akeem lives a life of pampered luxury in the African land of Zamuda. He does nothing for himself and has a host of staff to cosset his every need. Turning 21 years old he is due to meet his chosen bride, a beautiful woman who was singled out at birth and trained to know everything about him. However, Akeem is not happy about everything in his life being arrange for him so he decides to venture to America to find a bride who'll love him for who he is and not what he is.

Together with his personal butler Semmi, they venture to America and Queens in New York. There they attempt to blend in with the locals and get a job at the local burger chain "McDowells". It is there he meets the girl of his dreams, Lisa McDowell. Trouble is she is seeing Darryl, the rich and idle son of a hair care product tycoon and her father Cleo only wants the best for his daughter. Not only that, but younger daughter Patricia has a crush on Akeem.

The picture is a bit of a disappointment with little or no attempt by Paramount to clean up the picture. It suffers from near continuous dust specks and picture imperfections, but for a film of this age they can be forgiven. The colours are slightly washed out and there can be too much contrast at times, looking suspiciously too much like the video. However, there are no signs of artifacting or outlining and it has an above average bit-rate, although it seems to be a little erratic with leaps to maximum for no apparent reason.

Although the picture is relatively poor, it is made up by the wonderful sound and it is the musical score that shines the most. This is especially evident during the initial scenes when we are introduced to the prince and his bride where all of the channels are used to their full extent. There is a reasonable amount of activity in the surround channels and the dialogue is crystal clear in the centre channel. It certainly makes up for the substandard picture and extras.

Yet again Paramount see it fit to provide a disc with a static and silent menu with no extras of interest. Although it has a trailer these are becoming a little tiresome as, what is in essence is a back catalogue disc, offers little or no value for money.

Arsenio Hall and Eddie Murphy play off each other so well and this is certainly one of Eddie Murphy's best films. There are plenty of laughs throughout the film, with the barber shop being one of the best, and you can spend the whole of the film spotting their many cameo roles.