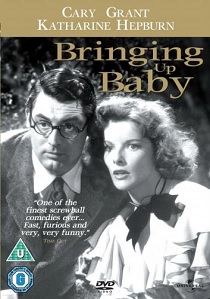 Dr. David Huxley is a bit of a straight faced paleontologist who is juggling three important events at once. There's the arrival of an extremely rare bone needed to complete his massive dinosaur skeleton which he's been working on for years, a very important meeting to ask for a million dollars for his museum from a wealthy donor and, last but not least, the small matter of his marriage to the rather prim and proper Miss Swallow. Things happen in David's life without too much excitement, but that's the way he likes things. Mind you, that's all about to change when his life is turned upside down by a woman and a leopard.

Whilst out on the golf course trying to charm the dollars from the possible benefactor, David bumps into Susan, a free-spirited young woman who seems to bring trouble wherever she goes. Not only has she gone and played his ball, but upon leaving the golf course she gets in the wrong car and starts what can only be described as a demolition derby in the car park. But unknown to David, Susan is the niece and prospective heiress to his potential philanthropist's fortune and no matter where he goes, David always seems to bump into Susan which is then usually followed by one mishap or another.

When Susan calls David asking for help with a leopard which has turned up at her apartment, David is naturally not too keen to help out, especially since the final bone to his prized dinosaur has just turned up and he's due to get married the next day. Faking distress, Susan manages to convince David to go to her apartment, but in a fatal mistake he takes his prized bone with him. The leopard is for Susan's aunt Elizabeth, and after "baby" takes a shine to him he's forced to help deliver it to her home in the country. However, as usual, the plan goes disastrously wrong when a dog takes a liking to David's dinosaur bone and buries it in the rather large garden of the country estate. Cue chasing a dog around the garden, an escaped leopard causing chaos in the town and a couple inexplicably falling in love.

It's difficult to complain too much about the quality of the transfer here, after all it is from a film which was made way back in 1938. However, for such screwball classic of essentially historic proportions we appear to have been somewhat let down. When you consider the wonders that can be performed by computers, with the Laurel and Hardy collection being a prime example, it's just a pity that a bit of digital wizardry wasn't employed here to tidy things up. But as it is, the black and white picture is grainy and is riddled with print damage and dust specks. Still, given the age of the print you can't really expect it to be on par with the latest Hollywood blockbuster.

Like the picture, the 1938 sound from the 192 Kbps 2.0 Dolby Digital mono soundtrack is nothing special and your fancy, and expensive, surround system can be put to one side for this film. The soundtrack is certainly showing its age and, as with the accompanying orchestral score, the dialogue can occasionally break up and sound a little indistinct in the centre channel. But, as with the picture, I'm sure it could have been remastered to some degree and made things sound a lot better than they currently are.

The menu is scored with music from the film whilst it is animated with full screen clips from the film. Extras wise, there's not a lot to go one, but then again, the esteemed cast are no longer with us to provide interviews or background information. However, at least there's actually some extras to look at in the form of some fairly extensive Production Notes and Cast and Crew biographies. Mind you, with the amount of re-releases the film has had over the years I'm sure there were some theatrical trailers out there.

Whilst the story starts off slowly, as it progresses it gets madder by the minute until you're having trouble keeping up with all the madcap antics. It's a bit of a bizarre thought, but the nearest thing I could think of as an modern day equivalent is Planes, Trains and Automobiles where just about anything that can go wrong does go wrong. And given its age, it still has managed to keep the slapstick comedy fresh enough for a new generation to enjoy and to realise just how attractive some of the stars of old really were. Madcap antics or not, it's all still inoffensive material which the entire family can enjoy time and time again. It's just a pity about the quality of the print.

Bringing Up Baby is part of the Screen Goddess DVD collection of films from Marilyn Monroe, Sophia Loren, Rita Hayworth, Doris Day, Katharine Hepburn, Barbara Stanwyck and Mae West. This collection includes an array of timeless classics that span four decades of film-making and feature unforgettable movies such as Some Like It Hot, El Cid, Gilda, Pillow Talk, Guess Who's Coming to Dinner, Double Indemnity and My Little Chickadee.