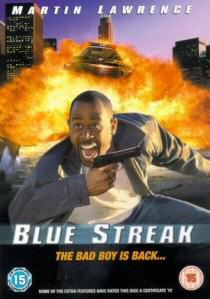 Miles Logan is thief, and a good one at that, but he has a bad egg on his team and things go wrong and the police soon arrive on the scene during a daring diamond robbery. During his escape he hides the stolen diamond in a building under construction knowing if he is caught he'd be able to return one day and collect.

He is caught by the police and sentenced to two years in prison. On his release he returns to the building only to discover that it is LAPD's newest police station. The only way in is either in handcuffs or with a badge, so using his criminal contacts Miles obtains a set of fake credentials and a badge. Unfortunately for him, his disguise is too good, his work unorthodox and he has just been promoted to lead detective of the burglary division.

The picture quality is excellent with bright and crisp colours with an above average bit-rate and no visible signs of artifacting. The only criticism I would offer would be that there was too much contrast which had a tendency to effect the darker scenes. Although the surround channels were active during the film they only tended to be used by music and there were no LFE's at all. However, this all changed with the final shoot with the bad buys with the usual set of explosions and bullets flying all over the soundstage.

The extras are fairly decent, although the two featurettes seem to repeat each other, and the three music videos are only interesting if you are fan of rap music. Again, Columbia deem it fit to ruin the cover by listing all of the extras on the front cover.

Although the film is decent enough it is just lacking that little something that turns a good film into a great film. One thing is for certain though, this is no Bad Boys or Beverly Hills Cop and I get the impression that Lawrence is trying, unsuccessfully, to model himself on a certain Eddie Murphy. For a comedy film I just found myself not laughing enough, which is a shame as Martin Lawrence is a good actor and he can do better, as he proved so admirably in Life