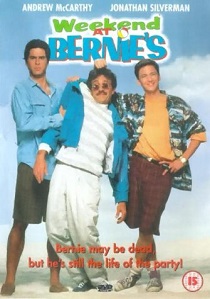 ReviewComedy
Review Article Go back to homepage
Larry and Richard work at an insurance company and they've just uncovered an embezzlement scheme. On presenting the facts to their boss he awards them with a weekend visit to his holiday home on Long Island. Unfortunately the host has turned up dead and they aren't planning on letting this upset their weekend!
Andrew McCarthy, Johnathan Silverman, Catherine Mary Stewart, Terry Kiser
Comedy
2
1 Hour 35 Minutes
Thank you for supporting DVD365.net when you order using the link(s) below.
Buy DVD
Story

After uncovering an elaborate fraud at their office, Larry and Richard are awarded with a weekend visit to their bosses luxury holiday home on Long Island. Unfortunately for the boys their boss, Bernie, is the embezzler and wants them out of the way, permanently. Bernie approaches some gangland friends who, rather than killing the boys, decide to kill Bernie for being sloppy and for "playing away" with the gang leaders girlfriend.

Ready for a loafing weekend, Larry and Richard turn up at the holiday home only to discover that Bernie is dead. However, the constant flow of people to the house don't seem to notice that Bernie is as dead as a dodo and the boys take advantage of the situation. They decide not to let the small issue of a corpse in the house spoil their weekend. However, they uncover Bernie's plot to kill them and they need to act as if Bernie is still alive with hilarious consequences.

Poor Terry Kiserl, who plays Bernie, only has a speaking part in the film for about 10 minutes before becoming a corpse. From then on his body endures many embarrassments as he is buried in the sand by a cheeky little imp, goes water skiing(!), is washed out to sea and even used as a life raft!

The disc is only presented in stereo with a 4:3 aspect ratio which is occasionally grainy and suffers from artifacting. However, the picture is still bright and colourful with an above average bit-rate and is still quite pleasing to the eye. Also, perhaps to reduce the price of the disc, and a trait of the Carlton range of DVDs, no subtitles are available on the disc.

Some of titles Carlton have released into the region two domain have, frankly, been crap. They have been of a poor quality and of little interest. However, 'Weekend at Bernie's' is a wonderful post beer film to raise quite a few laughs. Ok, so the eighties clothes are awful and the picture can be grainy at times, but at a bargain £9.99 what are you waiting for?