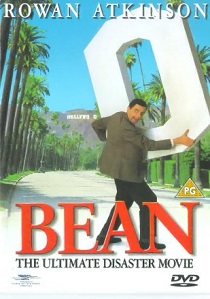 ReviewComedy
Review Article Go back to homepage
In a desperate attempt to get rid of Mr. Bean, the Royal National Gallery sends him off to America just so they can try to lead normal lives again. Unfortunately Mr. Bean is mistaken for a renowned art scholar with disastrous consequences!
Rowan Atkinson, Peter MacNicol, John Mills, Pamela Reed, Harris Yulin, Burt Reynolds, Larry Drake, Danny Goldring
Comedy
2
1 Hour 26 Minutes
Thank you for supporting DVD365.net when you order using the link(s) below.
Buy DVD
Story

The film revolves around Mr. Bean wrecking the Whistlers Mother, destroying the lives of the family he stays with, making a poor security guard leave his post (look out for this bit, its hilarious) and generally causing havoc.

Interestingly, I was expecting the character of Mr. Bean to be horribly Americanised to fit our friends over the pond, but surprisingly its not too bad, with Mr. Bean speaking just a little more than he usually does and only very softly.

There are some super scenes in the film with the aforementioned security guard scene being one of them (it involves laxative, a locked toilet and a lot of keys...all mixed up). Other scenes of note are the microwaved turkey scene where our friend Bean offers appetisers of raw onion on sticks! and the destruction of The Whistlers Mother and his botched attempts to fix it with a biro!

Picture quality is generally good, especially when you consider the relatively low bit rate. I certainly couldn't see any artifacting and the summery outside scenes of California certainly look nice. Sound is clear, but its fairly dialogue based so don't expect anything special. I felt a little let down with the turkey scene as I expected something better (I'm still not letting the cat out of the bag over this!).

One annoyance of note is that although there is supposed to be a 16x9 version of the film on the flipside, it doesn't seem to be there on my copy. That's not to say its the same on every copy, but watch out.

Extras are practically none existent, which is no surprise to those who know what R2 disks are like. All in all, a very funny film as long as you like your comedy slapstick style and you can tolerate Mr. Bean.