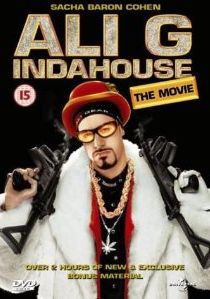 Ali G has a mission. It is to help the children escape from the ghetto that is known as Staines. Although its not the most salubrious of locations in England, it certainly isn't a ghetto, although thinking about it, Slough is just down the road. Anyhow, together with his loyal posse, the West Staines massive, he runs sessions at the local youth club on how to become streetwise.

During one such session with local cub group Ali is informed that due to government cutbacks his beloved youth club is to be closed down. Incensed by this action he decides (after asking his Nan of course) to chain himself to a fence outside the council offices and go on hunger striker. However, no sooner does his action start that the rival East Staines massive turns up and pull his trousers down around his ankles.

Meanwhile, the Chancellor has turned up at the council office to look for a suitable candidate to run in the parliamentary elections. However, he's not looking for a candidate to win the seat but someone who will totally humiliate the Prime Minister into resigning. Fortunately for him, he looks out of the office window to see a half naked man chained to a set of railings.

Duly selected for the local party candidate Ali G goes around insulting just about every voter and managing to turn an 18 point lead into a 9 point deficit. Every thing is going to plan until, amazingly, Ali G is elected as the member of parliament for Staines. If things couldn't get any worse for the Chancellors devious plans to become Prime Minister, Ali's youthful ramblings end up making the government and the Prime Minister even more popular than ever.

Surprisingly, for what I suspect is a relatively low budget film, the picture is bright and colourful with plenty of detail and an above average bit-rate throughout. There's no signs of any artifacting or outlining and the rich colours of Ali's clothes from the streets of LA to the ghettos of Staines are handled without any problems at all.

Again, the sound is surprisingly good with some clear and precise audio during the film. Although there are no real surprises in the surround channels, the full range of the soundstage is well used throughout by the musical score and the dialogue is clearly audible throughout. It's also no surprise that the catchy soundtrack is also available to purchase.

For fans of Ali G the two hours of extras are going to make this disc a must purchase. There's a behind the scenes featurette, deleted scenes and a pant wettingly hilarious (but essentially pointless) audio commentary with Sacha Baron Cohen still in character. About the only serious things on the disc are the trailers. It certainly makes for one of the most tongue in cheek discs for years. Although the script is poor and quickly looses its way, this film is the perfect preview of Sacha's many comic talents. The near continuous levels of sexual innuendo and toilet humor may annoy some, but get a few mates round, crack open a few beers and it will have you rolling around the floor with laughter.

The only down side for true Ali G fans is the fact that in his television series everyone he meets or interviews has no idea he is acting and making them look stupid. However, in this film everyone accepts him for who he is. Never the less, with the many featurettes containing Sacha still in his Ali G character and a totally stupid and funny audio commentary, it is a film sure to grace the collection of any fan of Ali G, Innit.