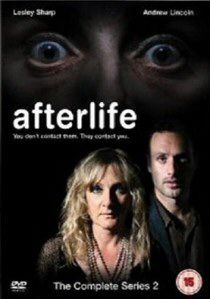 ReviewTV SeriesDramaThrillerAndrew Lincoln
Review Article Go back to homepage
Surviving a train crash in which many people lost their lives, Alison Mundy is now in touch with the spirits of the dead who come to her for help.
Lesley Sharp, Andrew Lincoln, Kate Duchêne, Anna Wilson-Jones, Amanda Lawrence, David Threlfall
Drama, Suspense/Thriller, Television
2, 4
6 Hours 11 Minutes
Thank you for supporting DVD365.net when you order using the link(s) below.
Buy DVD
Story

Surviving a train crash in which many people lost their lives, Alison Mundy is now in touch with the spirits of the dead who come to her for help. It is not a gift she cherishes, and she is very much the reluctant medium. Moving to a new area she lies low and seeks solace - which she finds in a University Professor Robert Bridge, who is very much a sceptic. Robert begins to write a book based on Alison's experiences whilst privately mourning the death of his young son. Together they forge a kind of friendship as they each search for answers.

In the climax of series one Alison collapsed and nearly died during a séance in which she makes contact with Robert's son. Witnessing the events, Robert begins to question his disbelief and he turns to Alison to try and make sense of it. The second series finds Alison recovering from her ordeal that left her in a coma for twenty seven days. Finally realising that she will never be free of the spirits, Alison decides that her life's purpose is to help the dead resolve their problems with the living.

For a while, things get back to normal - well, as normal as normal can be for a medium. However, Alison soon becomes deeply disturbed when she learns of a terrifying presence from the past tormenting her life and home and she must confront it before it she loses her sanity. Meanwhile, Robert falls ill and makes an unnerving discovery that will change the way he perceives the world around him and his feelings for Alison.

The second series contains eight forty-five minute episodes, which are outlined in more detail below. However, please be aware the episode synopses contain plot spoilers that may ruin your enjoyment of this gripping series.

Given the subject matter, the picture is bright and colourful with a high level of detail throughout. Being a television production, and a recent one at that, there are no problems with transfer issues, such as dust specks and print damage. Naturally, without the constraints of the broadcasting medium the DVD picture quality is already far superior to the original television broadcast. With the programme taking place within dark and gloomy interior locations you'd expect a few challenges for the DVD encoding process. And indeed, there are a few challenges - to which the DVD copes rather well with only a few instances of grain visible. On the whole though, it's a good all round picture performance that really helps to add to the dramatic and eerie feel to the series.

Being a British terrestrial broadcast on ITV, the audio is restricted to a mere 224 Kbps Dolby Digital 2.0 stereo soundtrack. Still, that doesn't mean that it's no good as the drama is just as effective on screen as it is in the sound department. Whilst it isn't a particularly dynamic soundtrack, your pro-logic system will make a good attempt to crank up the suspense with some clear and precise dialogue and haunting soundtrack. You don't even need a surround system to get results and your humble television speakers will perform just as well - and it's certainly a welcome addition for a spooky drama series such as this.

The menus across each of the three discs in the series are scored but static with images of the main cast members and episode characters displayed on the screen. Fortunately, as well as permitting the selection of an individual episode - and if you've not already been scared to death - the entire disc can played in one sitting. Each episode is also equipped with subtitles. Extras wise, unlike the first series which was equipped with a number of audio commentaries, there's only one extra on the third disc - and that's a Behind the Scenes Featurette.

Running at forty-five minutes, the made for television featurette looks at both of the series and, unfortunately, is accompanied by a rather annoying "voice over man". Equipped with subtitles and a rather good picture transfer too, there's plenty of clips from both series whilst both Lesley Sharp and Andrew Lincoln crop up throughout and give their thoughts on the production. The programme also includes interviews with researchers, producers and actual mediums who were more than impressed with the way Lesley portrayed them. A very interesting featurette indeed, and something that fans of the series will really enjoy.

As with the much underrated Medium (after all, the BBC saw it fit to stick it in some late nigh timeslot) there is no need for flash special effects where various ghosts and spectres appear in various garish and obvious CGI forms. The only thing that appears on the screen is your average actor or actress whilst the rest is left to your very own imagination - and that's never going to be beaten by your fancy CGI graphics. Nope, all the good old props and make up department had here was gallons of fake blood, broom handles in the back of drawers and a box of dry ice.

There's no doubt that Alison Mundy acts her heart out with a simply sublime performance that gets better as the series progresses. It's also a performance that earned her a Royal Television Society's Best Actress award. Even Andrew Lincoln, who is probably more accustomed to comedy performances, puts in a good performance - even if I couldn't get his comedy act in the rather funny Teachers series out of my mind. It's just a pity that it looks like the series has come to an end - with numerous rumours circulating on the Internet stating that ITV have not recommissioned the series. A bit of a shame really, as it could have been a rather interesting third series.

If you like your supernatural thrillers then you'll love Afterlife, and if you've never seen the series then the two series double box-set is an attractive proposition indeed. However, one word of warning. This is an excellent psychological thriller that may have an affect on young minds. It's definitely worth while saving this series until after the kids have gone to bed - that is unless you fancy a sleepless night with scared children. With a rather good behind the scenes featurette, there can be no other outcome than a highly recommended tag.