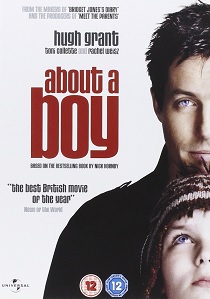 Wil is a trendy 38-year old Londoner who, thanks to the royalties from a Christmas record made by his late father, spends his days buying new CD's, worrying about his hairstyle and watching Countdown on television. Whilst his days may be a little on the dull side, the nights are far more interesting with all of his time devoted to women and avoiding the subject of work. Mind you, he can't stand the idea of commitment so as soon as a relationship is getting established he dumps the girl and heads back to his life of solitude and Countdown.

Will hits onto a simple way of dumping women, or rather single women dumping him, when he's introduced to a single mother called Angie. After all, they're all desperate for a man and will be more than happy, no make that, eternally indebted, for what Wil can offer. Buoyed by this discovery he joins a single mother group called SPAT (Single Parents Alone Together) and plots to meet more single parents. Unfortunately for Will he has forgotten to consider that single mothers tend to come with some emotional as well as physical baggage in the form of their offspring. Oh, and there's also that slight problem of the now "single parent" Wil not actually having a child.

When Wil takes one such single SPAT mother out on a date she brings along a twelve year old child of another group member called Marcus. Marcus, like most rosy faced children, is suspicious of Wil and soon figures that he hasn't got a child at all. With Wil's secret rumbled Marcus decides to hound Wil and match him up with his suicidal mother. Although Wil wants nothing to do with Marcus they soon strike up a friendship that sees Marcus forcing Wil to grow up and Wil helping Marcus to stand up for himself and beat the school bullies.

The picture is bright and colourful throughout with a good level of detail. The varying interior and exterior scenes are handled with ease and the high bit-rate results in a crisp and clear picture with no signs of artifacting or outlining. It was also pleasing to see no picture imperfections or dust scratches on the print. It's still a shame that modern films can still suffer from these sorts of problem when transferred to the digital domain.

For such a dialogue intensive film there are few requirements or opportunities to exploit the soundstage to its fullest. However, speech is firmly fixed in the centre channel at all times and is at a level that doesn't require constant adjustments to the volume. The front and surround channels only tend to be utilised by the Badly Drawn Boy soundtrack but it's perfectly blended in with the main dialogue. It's all pleasantly presented resulting in a film that is both easy to watch and listen to.

The menu is a static and silent affair which, although carrying a few pictures from the film, is a rather disappointing and boring effort. Each static menu is reasonably thought out and the contents are at least somewhat related. It's just a pity that more time and effort is not spent on developing better menu systems, after all, for a high profile title like this you'd certainly be expecting to impress.

If the menu disappoints then the extras are interesting enough. There's some behind the scenes footage, a number of deleted scenes and an interview with soundtrack providers Badly Drawn Boy as well as their music videos accompanying the film and soundtrack. The main highlight of the disc would have to be the informative audio commentary from directors Chris and Paul Weitz which covers both the film and the deleted scenes. There's hardly a moments silence as the pair, showing great interest in the film and production, jabber away incessantly.

This really is a great comedy film worthy of many repeat viewings and is a real boost for that dinosaur known as the British film industry. It manages to be moving one minute then hilarious the next with Hugh Grant's swearing "Bugger!" at the most perfectly timed moments. What's more, he's joined the twenty first century and dispensed with that awful floppy haircut. It's definitely his best performance since Four Weddings a Funeral.