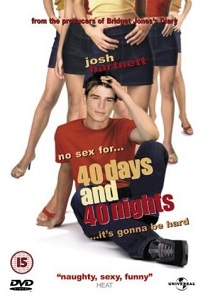 Matt Sullivan foolishly thought he was in a great relationship with Nicole. But when his world comes crashing down he finds himself having sex with just about any woman he can find. Much to the disgust of his room mate, Matt realises that he's being shallow and selfish and finally decides to do something about it. He tells his priest in training brother of all his sordid tales of lust and they decide that he should give something up for lent.

So that's when Matt, a guy who's never been able to finish anything in his life, decides to give up sex for lent. That means no touching, no kissing, no nibbling, no foreplay, no fooling around, no self-gratification, no nothing for forty days and forty nights. This is going to be very hard work indeed, especially when his office sponsors the annual a no-bra day.

At first he has everything under control, but his so called work colleagues have different ideas. Expecting Matt to give up well short of the forty days a small office based betting syndicate soon becomes a global affair with a website plotting his daily progress and temptations. There's even some evil temptress trying out the photocopy for size in an attempt to get Matt to give in. But when the woman of his dreams walks into his life his vow of no sex is going to be severely strained.

The picture is bright and colourful with plenty of detail and colour depth. The above average bit-rate provides a clean and precise picture that exhibits no signs of artifacting, outlining or graininess. The print also appears to be clean and pristine with no signs of any dust scratches or whiskers. It certainly puts some of the bigger budget film to DVD cash-ins to shame.

The sound is a rather average affair with no real use of the surround channels. The dialogue is crisp and clear in the centre channel together with some good stereo steerage. Whenever the foot tapping musical soundtrack burst into life it remains perfectly in balance with the dialogue and there's never a moment when the volume needs adjusting.

The menu is a boring static and silent affair with a minimal set of extras. The disc comes with a teaser trailer (what happened to the full version?) and a full length audio commentary. Whilst there's no making of documentary the commentary more than makes up for this. From the moment the film starts the director and screenwriter provide interesting details and insights on the films production, with one of the most interesting being the reason for Josh Hartnett extremely short haircut (I'll leave that one for you to work out for yourself). The poor old producer hardly ever gets a word in. Pity there's no input from the actors though.

This film is trumpeted as being from the producers of Notting Hill and Bridget Jones's Diary, but if you are expecting to laugh in the same manner as these two films then you're going to be sadly disappointed. This film is most definitely aimed at a teenage audience, and an sexy obsessed one at that, and it does have its comedy moments. Many of these moments came from Paulo Costanzo, as Matt's sex obsessed room mate, which is a little bizarre really as you'd have thought the lead role would have caught all the laughs.

Unless you're a fan Josh Hartnett, or one of those many sex obsessed teenagers that the film is aimed at, I can't really recommend this film. It's either because I'm getting too old, even though I did find the American Pie films very funny, or that this type of film genre just isn't that amusing to me anymore. Alas, I am no longer a thirty-something with the filthy mind of a teenager.