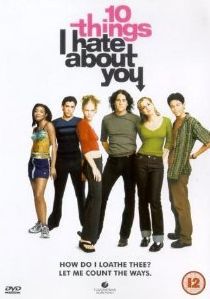 In the latest run of American teen movies comes 10 Things I Hate About You, a film based upon Cameron's attempts to go on a date with Bianca. However Bianca's father has one strict rule 'no dating until your sister Kat dates'. So Cameron aided by Michael sets up elaborate plot to get the school bad boy Patrick (rumoured to have sold his own liver for a new pair of speakers) to date Kat, so he can go to the Prom with Bianca.

10 Things carries a more weight than other similar teen movies like She's all That. The director seems to have taken standard ploys from other films that give a happy ever after ending and turned them around to make for more unpredictable viewing.

The adult cast does not feature heavily in this film, but when they do appear they are used like a precision tool to provide some very carefully placed and funny jokes. The guidance councillor provides humour based on very unexpected responses to normal situations, the gym teacher provides the visual gags, Bianca's and Kat's dad provides some of the best one liners in the film. But it is the teacher who stands out from the rest of the adult cast as being the funniest.

The film has no special features but it has a cracking soundtrack, mainly featuring Letters to Cleo, and during the end credits there are some entertaining outtakes. The picture quality was good will some rich colours and no signs of artifacting. The sound quality is reasonable enough will some clear and precise dialogue in the centre channel, but the surround channels are extremely under used with only the soundtrack finding its way to the rear.

I found the film highly entertaining and ended up watching it more times than I think I should admit to. If you like teen movies then is film is not to be missed, if you don't then I still think that this film is funny enough and good enough to be worth watching.

Special Features
Related Articles
I Am Heath Ledger, I'm Not There, The Sin Eater
Sausage Party, I Saw The Light, Men at Work: Season 1, The Mexican, Ray
Alpha and Omega, The Man Who Killed Hitler And Then The Bigfoot
Comments
RecommendedView