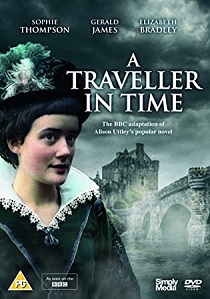 History and time travel collide in the classic BBC adaptation of Alison Uttley's acclaimed novel, A Traveller in Time in which a twentieth century teenager is transported to Elizabethan times where she must try and save Mary Queen of Scots. This fantastic children's fantasy drama from 1978 arrives on UK DVD for the very first time on 9th November 2015 courtesy of Simply Media.

When Penelope Taberner (Sophie Thompson - Detectorists) goes to stay with her Uncle Barnabas (Gerald James - The Man with the Golden Gun) and Aunt Tissie (Elizabeth Bradley - Coronation Street) on their remote, ancient Derbyshire farm, she begins to see spooky visions.

Travelling back to Tudor times, she soon uncovers a plot to free Mary Queen of Scots in order to overthrow Elizabeth I. Unfortunately her very own ancestors, the Babington family, are responsible for the treason. Penelope already knows the tragic fate that awaits the Scottish Queen but can she stop history from following its natural course?

This mysterious and charming five-part BBC drama inspired by the real life Babington Plot, was produced and directed by Dorothea Brooking (The Secret Garden), and stars Sophie Thompson in her first TV appearance, alongside the late Simon Gipps-Kent (Great Expectations).

It's time to revisit history in A Traveller in Time.

HotUHD
Let an awesome journey unlike any other begin as Stanley Kubrick's dazzling 2001: A Space Odyssey is released on 4K UHD 22nd February 2021 from Warner Home Video. END_OF_DOCUMENT_TOKEN_TO_BE_REPLACED
Hot PicksView