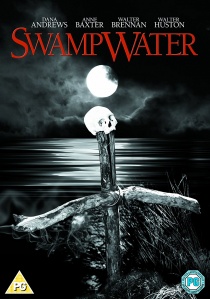 Tom Keefer (Walter Brennan) is a man falsely convicted of a murder and sentenced to death by hanging. He has escaped from prison and is hiding out in Georgia's Okefenokee Swamp. Keefer is dedicated to finding the real killer and clearing his name.

A trapper, Ben Ragan (Dana Andrews), is out searching for his dog when he finds Keefer hiding in the swamp. Ben believes the man's tale of being falsely railroaded. The two men trap animals together and Ben sells the furs. Keefer tells Ben to give his share of the money from their pelt sales to his daughter, Julie (Anne Baxter). Ben eventually falls in love with Julie, arousing the wrath of Ben's girlfriend Mabel (Virginia Gilmore), who tells authorities about Keefer's secret. Ben, however, refuses to co-operate with officials' efforts to locate the escaped convict.

Related Articles
The Ox-Bow Incident, Crack in the World, A Walk In The Sun: The Definitive Restoration
The Bogeyman: Slasher Classics, The Howling: Special Edition
The Ten Commandments, All About Eve: The Criterion Collection, Walk on the Wild Side, The Razor's Edge
Comments
UHD Releases News Pick

UHD
Doctor Strange teams up with a mysterious teenage girl from his dreams who can travel across multiverses in Doctor Strange in the Multiverse of Madness, released on DVD, Blu-ray and 4K UHD 18th July 2022 from ... END_OF_DOCUMENT_TOKEN_TO_BE_REPLACED
Top PicksView