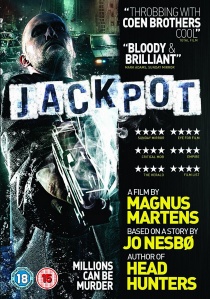 Jo Nesbø has sold over 9 million books - This film is based on a story you haven't read as Metrodome Distribution release Jackpot on DVD on 7th January 2013.

Oscar Svendsen wakes up, terrified and bloodied; a shotgun in his hands, in what was once a respectable strip joint near Svinesund, Sweden. He is surrounded by eight bodies and police detective Solør has a gun aimed at his chest. Solør is convinced of his guilt, but Oscar persistently denies any wrongdoing.

Reluctantly Oscar starts relating the incredible story of four men who won top prize in a soccer pool and suddenly found themselves 1,739,361 kroner richer. But it turned out to be difficult to divide the money by four.

Jackpot is an exciting, playful and bloody comedy from the producer of Cold Prey. It is based on a story by Norway's leading crime writer, Jo Nesbø. We meet a group of scruffy young men, all of them with a criminal background. Oscar (Kyrre Hellum), Thor (Mads Ousdal), Billy (Arthur Berning) and Tresko (Andreas Cappelen). They work at a factory in the middle of nowhere that makes plastic Christmas trees. And they bet on soccer...