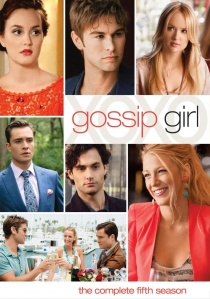 Everyone's favourite socialites are back, preened to perfection and up to their usual glamorous antics in the hotly anticipated Gossip Girl: The Complete Fifth Season, which lands on DVD on the 3rd September 2012 from Warner Home Video.

Season 5 is more scandalous than ever, thanks to an emotional roller coaster of events including a Royal wedding to remember and messy divorces to forget. Don't miss a second of forbidden friendships and family friction which threatens to break the closets bonds, as the New York elite take on one another like never before.

This season Blair (Leighton Meester) faces a series of heart breaking decisions as she is torn between her admiration for the eligible French Prince Louis' (Hugo Becker) and the soul-mate bond she shares with the troubled Chuck (Ed Westwick). But just when you think she has made her final decision, a new and highly controversial romance blossoms which is set to shock the entire Upper East Side set.

Meanwhile, a shady Serena (Blake Lively) takes on the untouchable Gossip Girl and seizes the chance to be in control of the XOXO herself. Relishing in her new-found power as the queen of salacious secrets, Serena plays with fire and almost blasts her own friendships out of the water. Nate (Chace Crawford) takes reign of a new and exclusive newspaper, but gets distracted by a gorgeous British cougar (guest star Elizabeth Hurley), but is it love at first sight or is this lady with a motive just toying with the young hot Editor?

Across the river in Brooklyn, Lonely Boy Dan (Penn Bagdely) runs the risk of losing all his Upper East Side frenemies, as he discovers that someone has anonymously published one of his scandalous stories. What seems like a good thing for the budding writer could end in disaster for Dan, as this story is just a little too close to home... his home!

And the backstabbing doesn't stop there...! The return of Serena's long lost suspicious cousin Charlie (Kaylee DeFer) could spell disaster for the Van Der Woodsen family and watch in disbelief as a familiar face makes a reappearance which could spell the end of Chuck Bass' Empire for good.

Don't miss the twists and turns of unlikely relationships and dramatic falls from grace with Gossip Girl: The Complete Fifth Season on DVD from 3rd September 2012 and available to Download on iTunes now!

UHD
One of the most compelling and conflicted characters in Sony Pictures Universe of Marvel Characters comes to the big screen as Jared Leto transforms into the antihero Michael Morbius as Morbius is released on 4K Ultra HD, Blu ... END_OF_DOCUMENT_TOKEN_TO_BE_REPLACED
Top PicksView