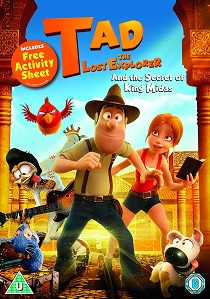 Tad the Lost Explorer and the Secret of King Midas (2017)

However, when Sara is then kidnapped by devious millionaire Jack Rackham (Miguel Angel Jenner), Tad and his friends must set off on an epic adventure to try and save her and thwart Jack's evil schemes.

Directed by Enrique Gato and David Alonso, the animated adventure sequel Tad the Lost Explorer and the Secret of King Midas is released on DVD 16th July 2018 from Universal Pictures (UK).

DVD
Four years after South Korea's total decimation in Train To Busan, the zombie outbreak thriller that captivated audiences worldwide, the next nail-biting chapter in the post-apocalyptic world Train to ... END_OF_DOCUMENT_TOKEN_TO_BE_REPLACED
Hot PicksView