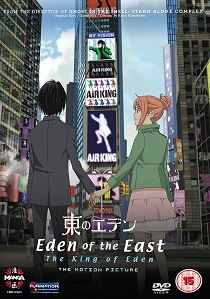 Eden Of The East Movie 1: The King Of Eden/Air Communication (2009)

Director Kenji Kamiyama's masterful Eden Of The East saga continues with The King Of Eden, the highly anticipated feature-length movie sequel to his original 11-episode animated TV series, released on DVD and Blu-ray by Manga Entertainment on 6th June 2011.

The movie begins immediately where the series left off, with Saki Morimi arriving in New York in search of her new friend Akira Takizawa, who has once again brainwashed himself and disappeared after leaving her his Selecao phone and a message to meet him where their original journey began.

Following recent events, Saki's friends at the Eden Of The East project have developed their work into a successful small business thanks to the international recognition of their computer software's role in preventing a series of missile attacks on Japan. Meanwhile, images of Taki pointing at the missiles and determining their destruction have circulated the globe turning him into a folk hero people are calling the "Air King".

Finally tracking down Taki to a riverside location where they spent time together shortly after they first met, Saki explains to him his past and his role as a Selecao, a pawn in a mysterious and deadly game to "save Japan". Meanwhile, other Selecao are monitoring their movements with one, in particular, intent on assassinating Taki and catching the event on film.

Described by Anime News Network as "a necessary sequel to a deserving series" with "near-perfect execution and a higher IQ than all of anime's lower echelons combined", The King Of Eden is packed with cinematic flourishes and homages to Hitchcock that make it "a piece of pure entertainment that would do the Master proud" (Anime News Network).

The DVD and Blu-ray releases of The King Of Eden come complete with the extra bonus feature, Air Communication, a feature-length compilation of the 11-episode TV series that will serve as a perfect introduction to the saga for new Eden Of The East fans and as a handy recap for those already hooked on Kenji Kamiyama's thrilling action-fantasy.