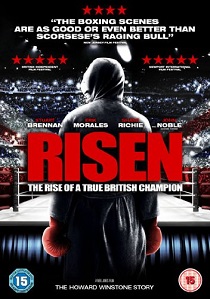 News
News Article Go back to homepage
As one of the rising talents of amateur boxing, Howard Winstone, was fast making a name for himself with his knock out right hand. A long professional fighting career surely beckoned? Then disaster strikes. The true story of one of Britain's greatest sporting heroes is brought to the screen by Scanbox Entertainment on 30th May 2011 in Risen.
Ed Eales White, Grainne Joughin, Shane Richie, Erik Morales, John Noble, Stuart Brennan
Neil Jones
Don James, William Grossman, Rupert Eales-White, Stuart Brennan
Scanbox Entertainment
1 hour 53 minutes
30/05/2011
Thank you for supporting DVD365.net when you order using the link(s) below. As an Amazon Associate we earn from qualifying purchases
Buy DVD
Information

The remarkable and compelling true story of one of Britain's greatest sporting heroes, Welsh boxing legend Howard Winstone, is brought to the screen by Scanbox Entertainment on 30th May 2011 in Risen, a distinctively British boxing film that ranks alongside The Fighter, Rocky, and Cinderella Man as a sports movie that transcends the genre while still managing to deliver "knockout fight scenes" (South Wales Echo) that are "as good or even better than Scorsese's Raging Bull" (New Jersey Film Festival).

Born in Merthyr Tydfil, Wales, in 1939, as a humble miner's son, Howard Winstone was one of amateur boxing's most promising rising talents, noted for his knockout right hand. That was until his dreams of a professional career were shattered when a fluke industrial accident led to the crushing of Howard's hand and the loss of three fingertips, rendering him incapable of making a proper fist. Severely depressed, Howard believed he had lost everything. Against the odds, under the guidance of a new trainer and with the unfailing support of his father, he adapted his technique and developed a new style of fighting that saw him once again rising victoriously through the amateur ranks.

Having won 83 of his 86 amateur bouts, by the time of his first professional fight Howard had overcome adversity to establish himself as a potential contender not only for the British and European Championship titles but also the World Championship title. Inevitably, though, success would have a price. With his marriage to his childhood sweetheart falling apart, a series of unsuccessful challenges for the World title and with the hopes of a nation resting on his shoulders, the pressures were mounting. Now the question was, did Howard Winstone have what was required to become the Champion of the World?

Star Stuart Brennan spent five years preparing for the role of Howard Winstone, training with Howard's best friend, Don James (who appears in the film as Billie Evans), and reached a standard of boxing where he could have turned professional (and was actually made an Honorary World Champion by the WBC; an honour only bestowed on the very few including Nelson Mandela, Bill Clinton and the Pope!). Stuart's skills allowed Risen to become the first boxing movie to portray full-contact fight scenes in which the lead actor actually trades blows with his opponents. This, combined with the first ever use of the HD Glove Cam, add an extra dimension to the film, making it a must-see movie for all boxing fans.