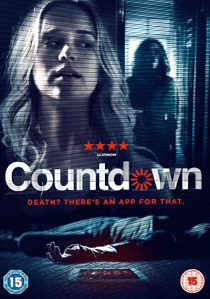 If you could find out exactly when you're going to die - would you want to know?

As her friends and colleagues reveal the many decades left on their lives, including Dr. Sullivan played by Peter Facinelli (Twilight Saga), Quinn is shocked to see her clock will run out in three days time. Initially dismissing the app as a passing internet hoax, she soon discovers people are violently killed at the exact second their clocks run out.

Starring Elizabeth Lail, Jordan Calloway, Talitha Bateman and Peter Facinelli. When a nurse downloads an app that claims to predict the moment a person will die, it tells her she only has three days to live. With the clock ticking and a figure haunting her, she must find a way to save her life before time runs out.

UHD
Sam Mendes, the Oscar®-winning director of Skyfall, Spectre and American Beauty, brings his singular vision to his World War I epic, 1917 to DVD, Blu-ray and 4K Blu-ray 18th May 2020 from Entertainment One. END_OF_DOCUMENT_TOKEN_TO_BE_REPLACED
Top PicksView