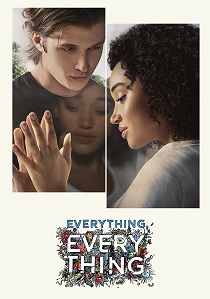 NewsDramaRomance
News Article Go back to homepage
What if you couldn't touch anything in the outside world? Never breathe in the fresh air, feel the sun warm your face... or kiss the boy next door? Based on the novel by Nicola Yoon, Everything, Everything is released on DVD 26th December 2017 from Warner Home Video.
Amandla Stenberg, Nick Robinson, Anika Noni Rose, Ana de la Reguera, Morgan Saylor
Stella Meghie
Elysa Koplovitz Dutton, Leslie Morgenstein
Warner Home Video
1 hour 36 minutes
26/12/2017
#EverythingEverything
Thank you for supporting DVD365.net when you order using the link(s) below. As an Amazon Associate we earn from qualifying purchases
Buy DVD
Buy DIGITAL
Information

Directed by Stella Meghie and based on the bestselling book of the same name by Nicola Yoon, Everything, Everything is released on DVD 26th December 2017 from Warner Home Video.

What if you couldn't touch anything in the outside world? Never breathe in the fresh air, feel the sun warm your face... or kiss the boy next door? Everything, Everything tells the unlikely love story of Maddy, a smart, curious and imaginative 18-year-old who due to an illness cannot leave the protection of the hermetically sealed environment within her house, and Olly, the boy next door who won't let that stop them.

Maddy is desperate to experience the much more stimulating outside world, and the promise of her first romance. Gazing through windows and talking only through texts, she and Olly form a deep bond that leads them to risk everything to be together.even if it means losing everything.

Meghie (Jean of the Joneses) directs from a screenplay by J. Mills Goodloe (The Age of Adaline). Leslie Morgenstein and Elysa Dutton are producing under the Alloy Entertainment banner; Alloy is also responsible for creating the hugely popular Gossip Girl, Pretty Little Liars and The Vampire Diaries. Victor Ho is serving as executive producer.

BD
After moving to a new town, two brothers discover that the area is a haven for vampires as the classic The Lost Boys is released on 4K UHD 20th September 2022 from Warner Home Video. END_OF_DOCUMENT_TOKEN_TO_BE_REPLACED
Top PicksView