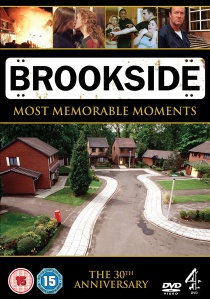 Re-watch. Relive. Remember. Relive thirty years of drama with Brookside's Most Memorable Moments, out on DVD from 26th November 2012 from Channel 4 DVD.

On the launch night of Channel 4 in 1982, a brand new soap began. An instant hit, Brookside's endless list of controversial issues made it ground-breaking drama and had viewers hooked for 21 years. Now, for the first time, watch the drama unfold from the very beginning with Brookside's Most Memorable Moments.

Packed with scandal, Brookside brought us religious cults, suicide pacts, sibling incest and the first ever pre-watershed lesbian kiss on British television. Re-watch and relive the dramatic highlights of its twenty-one year history including the soap's first ever episode, the terror of the 1985 siege and the shocking storyline of Sheila Grant's rape. Plus, witness Brookie's murderous moments, including the infamous episode in which Mandy and Beth Jordache finally bring an end to Trevor's domestic abuse.

It's the one the fans have all been waiting for! Watch the soap that pushed boundaries. Don't miss the ultimate DVD for Brookside fans this festive season!