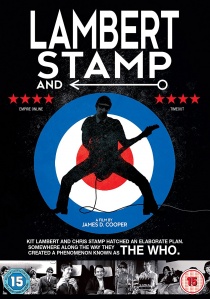 Take a trip back in time to the swinging 60s and what has been described as "London's heyday" with this year's must have Christmas gift for the mod rocker in your family. Lambert and Stamp, released on DVD by Lionsgate Home Entertainment on 2nd November 2015, tells the remarkable story of Chris Stamp and Kit Lambert, New Wave filmmakers from opposite sides of the tracks who set out to make an underground movie, leading them to discover, mentor and manage the iconic band known as The Who.

Featuring interviews with Chris Stamp himself and Roger Daltrey, Pete Townshend, Terence Stamp, Richard Barnes, Heather Daltrey, John Hemming, Robert Fearnley Whittingstall and Irish Jack, Lambert and Stamp offers a unique insight into the creation of one of the UK's biggest bands and the rise of mod culture.

Lambert and Stamp's complex relationship, deeply tragic and brilliantly comedic, fuelled the band's development leaving an indelible imprint for generations to come. Charged with a mad concoction of noise, love and rebellion, director James D. Cooper takes us on the surprising ride and universal search examining the sensitive and frightening bonds that make it possible to create.