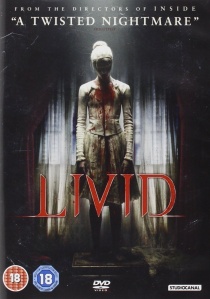 Following their acclaimed debut in Inside, Julien Maury and Alexandre Bustillo return with Livid, an inventive, smart and truly terrifying take on the 'haunted house', out to own on DVD and Blu-ray on 13th August 2012 from StudioCanal.

Lucie (Chloé Coullaud) is on her first day as an in-home caregiver in a gloomy seaside town in Brittany, assigned to the estate of a Mrs Jessel. Mrs. Jessel lies in a cerebral coma, by herself, in her large desolate house. Lucie learns from her trainer that Mrs. Jessel, once a dance instructor who lost her only daughter years, has hidden a treasure in her home that she's holding onto as part of her final will.

Upon retelling this story to her boyfriend, William (Félix Moati), the two along with William's brother, Ben (Jérémy Kapone), decide to go to the woman's home late on Halloween night and find the treasure for themselves. As the house reveals itself to be increasingly peculiar, their hunt for the Jessel treasure leads them into a horrifying supernatural series of events that will change Lucie's life forever.

Livid is a dark, hauntingly beautiful fairy tale, reuniting the directors with Béatrice Dalle, the star of their award-winning debut.

HotUHD
StudioCanal is thrilled to announce that the iconic cult classic, Highlander, is being released to own on 4K UHD for the very first time 31st October 2022 with brand-new artwork from celebrated artist Matt Ferguson. END_OF_DOCUMENT_TOKEN_TO_BE_REPLACED
Top PicksView