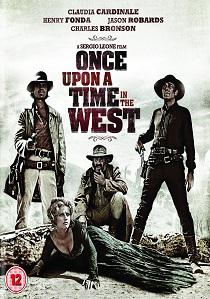 A motion picture as big as its Monument Valley locations, director Sergio Leone's glorious action packed western Once Upon A Time In The West makes its Blu-ray debut on 5th September 2011, from Paramount Home Entertainment.

This shoot-'em-up classic is considered, not only to be one of the greatest western films made, but has been voted as one of the greatest films of all time by Empire. Paramount Home Entertainment has enhanced the action with its new Blu-ray edition, which has been fully restored by The Film Foundation, Martin Scorsese's internationally recognised film preservation company. The Blu-ray copy has several exciting extras including both the original American version and the restored European version, commentary from leading film historians and more.

This classic stars Henry Fonda as a hired hitman who feels no guilt or pain after ruthlessly slaughtering an entire family for the gain of their land. Jason Robards plays the half-breed who is pinned for the murder of the family who will soon team up with Claudia Cardinale, the beautiful widow and Charles Bronson, the Harmonica man with a brutal past to seek revenge on the real killer. With such an unexpected cast; Once Upon A Time In The West shows the talent of these actors and launched their careers to new heights.

Now, this masterpiece has been restored by Scorsese's Film Foundation, a film preservation project which has enhanced the grit and style that this movie is known for. Ranked as one of the best western films of all time; this new Blu-ray edition demonstrates original gun slinging action that deserves to be savoured and appreciated in high definition. Ranked number fourteen out of Empire's 500 Greatest Movies of All Time, Once Upon A Time In the West is a five star classic.

The Once Upon A Time In The West Blu-ray features commentary by film historians Sir Christopher Frayling and Dr. Sheldon Hall, directors and cast, a documentary that shows the making and production of the film, relevant photos and interviews on subjects relating to the film, the theatrical trailer and more.

DVD
Doctor Strange teams up with a mysterious teenage girl from his dreams who can travel across multiverses in Doctor Strange in the Multiverse of Madness, released on DVD, Blu-ray and 4K UHD 18th July 2022 from ... END_OF_DOCUMENT_TOKEN_TO_BE_REPLACED
Top PicksView