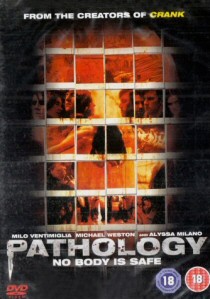 Hot New kids on the block Milo Ventimiglia (Heroes, Rocky Balboa), Alyssa Milano (Charmed, Who's the Boss?) and Michael Weston (The Last Kiss, Garden State) compete as elite medical students locked into a deadly game to create the perfect murder in the fast-paced, sexy medical thriller, Pathology. Directed by award-winner Mark Scholermann and from the writers of Crank, this absorbing psychological thriller is released by Entertainment in Video on DVD to rent on 4th August and buy on 18th August 2008.

Dr. Ted Gray (Ventimiglia), a top of his class at Harvard Medical School graduate, embarks on an internship on one of the United States' most prestigious pathology programmes. An extremely talented student, he is immediately noticed by the programme's close-knit group of other elite pathology interns and he is soon invited into their inner-circle, led by the increasingly psychotic Dr. Jake Gallo (Weston).

Seduced by the group's wild lifestyle of drugs, beautiful women and easy sex, Ted discovers the macabre heart of the inner circle's fantasies and his role in their after-hours killing game at the morgue. Competing to create the perfect undetectable murder, each member of the group must kill and then challenge the rest of the group to discover the cause of their victim's death.

As Ted becomes increasingly involved in the groups' killing game, it is only his fiancée Gwen (Alyssa Milano) who awakens his conscience and alerts him to the very real danger he's in. If Ted wants to stay alive and avoid becoming the group's next victim, he has to stay one step ahead of this deadly game....

BD
Arriving on DVD and Blu-ray 31st May 2021 from Acorn Media (UK), the hit police corruption drama from the makers of Bodyguard returns as Series Six of Line of Duty sees AC-12 facing their most ... END_OF_DOCUMENT_TOKEN_TO_BE_REPLACED
Top PicksView