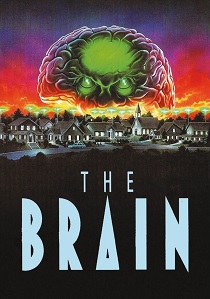 101 Films presents cult sci-fi horror The Brain (1988), an extraterrestrial overdose of cerebral terror and media mind control, available on Blu-ray for the first time in the UK and title 027 on the 101 Films Black Label.

Imagine a pulsating mass of grey matter, expanding in size and strength as it takes control of human minds and devours human bodies. It could never happen, right?

Just watch Independent Thinking, starring Dr. Anthony Blakely (David Gale, Re-Animator), a hot TV programme. But as the show's ratings continue to soar, so does the suicide and murder rate among its viewers. What they don't know is that Dr. Blakely has teamed with an alien brain and plans to gain control of all humanity.

The Brain is released on Blu-ray as a limited edition 1st August 2022 from 101 Films.

DVD
In The Duke, released on DVD and Blu-ray 13th June 2022 from Warner Home Video, Kempton Bunton, a 60 year old taxi driver, steals Goya's portrait of the Duke of Wellington from the National Gallery in London. END_OF_DOCUMENT_TOKEN_TO_BE_REPLACED
Top PicksView