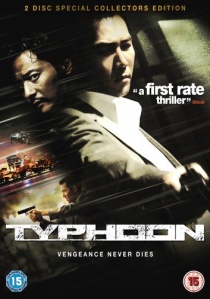 Director Kwak Kyung-taek's "pulse-accelerating thriller set in the headlines of today's volatile politics" (Film Review), Typhoon comes to DVD from Premier Asia on 20th August 2007as a two disc Special Edition packed with extras including cast interviews and behind the scenes featurettes.

An "entertaining, big budget Korean thriller" (Daily Record), Typhoon is an ambitious and technically impressive action movie that effectively takes on Hollywood at its own game. Set against the backdrop of the tense and potentially volatile political standoff between North and South Korea, Typhoon begins with the theft of a South Korean-bound cargo of US-supplied nuclear devices.

Masterminding the crime is Choi Myeong-sin, a psychotic, modern-day pirate who intends to use the devices to contaminate the entire Korean peninsula with deadly radioactive dust by launching them from a ship into the combined heart of a pair of approaching typhoons. For 'Sin' this is simply his revenge for what he considers was an act of betrayal by South Korea some 20 years earlier, when his parents were killed after being refused asylum from the North.

Heading up an undercover mission to foil Sin's plot to devastate the divided country is former Navy SEAL, Kang Se-jong, who manages to track down Sin's long lost sister in the hope of using her to lure Sin into a trap. Elsewhere, Japan and the US are considering their own options regarding how to avert the serious political repercussions of such a disaster occurring, with the latter launching a submarine to destroy all trace of the nuclear devices. Meanwhile, Sin's ship is sailing literally in the eye of one of the raging storms as the second typhoon approaches'

The biggest-budgeted South Korean movie ever made, boasting superlative production values and locations ranging from Korea and Russia to Thailand, Typhoon combines themes and action sequences reminiscent of John Woo's best work with the kind of cinematic thrills and pyrotechnics usually associated with the high concept blockbusters of Michael Bay and Jerry Bruckheimer.