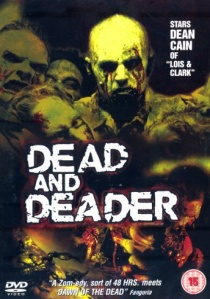 Described by Fangoria magazine as "a zom-edy 48 Hrs meets Dawn Of The Dead", Dead And Deader, released by Starz Home Entertainment on 2nd July 2007, stars Dean Cain (Lois and Clark: The New Adventures of Superman) and Colleen Camp (Factory Girl; Running With Scissors).

Dean Cain is Lt. Bobby Quinn, a Special Forces commando killed during a recon mission in the Cambodian jungle. But when Quinn interrupts his own stateside autopsy, he discovers that the rest of his dead squad has been resurrected with a ravenous appetite for human flesh.

Now with the help of a wisecracking cook (Guy Torry of American History X) and a sexy film geek (Susan Ward of Wild Things 2), the part-zombie Quinn must stop the plague before it can infect the entire nation. Who holds the shocking secret behind this blood-crazed carnage? And what happens when Quinn stops gnawing on raw steak and starts chomping on the hot chick?