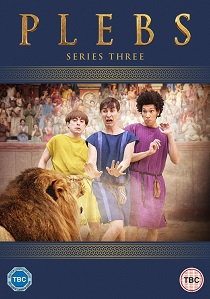 The Plebs are back again! Released on DVD by Universal Pictures (UK) on 18th July 2016, in series 3 of the award-winning sitcom set in ancient Rome, Grumio, Marcus and Stylax come up against ferocious lions at the games, a vicious landlady, an estranged father and a vestal virgin who is anything but!

25BC Rome. One year on in the eternal city... Tempus fugit.

Emperor Augustus Caesar is still the most powerful man in the known world. And languishing somewhere near the other end of the food chain are three lowly plebs: Marcus, Stylax and their feckless slave, Grumio (Tom Rosenthal, Joel Fry and Ryan Sampson).

As the ancestors of 'generation rent', they live in a squalid block in the worst part of town - presided over by the ruthless Landlady (Maureen Lipman). They work dead-end jobs for Rome's third largest grain supply company. And though the Games are in town, they can't get tickets for any event - not even the pig chase.

But an encounter with a fiery Gallic activist, Delphine (Bella Dayne) might at least improve Marcus' romantic stakes. Could she possibly become his Gaul-friend? Or is she just a bit too real for him?

BD
Now more stunning than ever before, return to the stunning locations and epic adventures in Peter Jackson's Middle-earth in The Hobbit Trilogy, arriving on stunning 4K UHD 30th November 2020 from ... END_OF_DOCUMENT_TOKEN_TO_BE_REPLACED
Hot PicksView