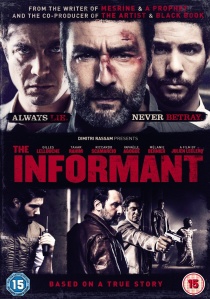 As Duval becomes further immersed in both the perils and temptations of the drug trafficking underworld he is forced to live on a knife edge, where only his lies can keep him alive. But it is when English customs land to arrest Lanfredi that Duval must take the greatest risk of all, placing his family in the heights of jeopardy.

Inspired by true events, the writer of Mesrine and A Prophet, The Informant, released on DVD and Blu-ray on 25th August 2014, courtesy of Kaleidoscope Home Entertainment, is a hard-hitting, suspense thriller that will make you question the very borders of the land you call home...

HotDVDBDUHD
Released on DVD, Blu-ray and 4K UHD 16th September 2019 from Lionsgate Home Entertainment, super-assassin John Wick is back and on the run after killing a member of the international assassin's guild, and with a $14 million price tag on his head - he is the target of hit men and women everywhere. END_OF_DOCUMENT_TOKEN_TO_BE_REPLACED
Hot PicksView