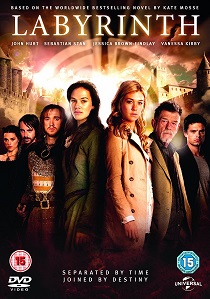 Are you ready for the most epic journey of your life? Be prepared to discover untold historical secrets as the action adventure, TV drama Labyrinth arrives on DVD on 1st April 2013, from Universal Pictures (UK).

Based on the multi - million selling novel by Kate Mosse, Labyrinth is a Ridley Scott & Tony Scott Production, featuring an all-star cast including; John Hurt (Harry Potter, Tinker, Taylor, Soldier, Spy) as Audric, a specialist on Ancient Egypt; Vanessa Kirby (Great Expectations; The Hour) as Alice, a modern-day fearless girl, who experiences dramatic flashbacks from the 13th Century; Jessica Brown Findlay (Downton Abbey, Misfits) as Alaïs, a 13th century courageous young woman, determined to protect the 'secret'; Tom Felton (Harry Potter, Rise of the Planet of the Apes) as Trencavel, a leader of the Carcassonne religion and a man of integrity, popular with his vassal lords and subjects; Katie McGrath (Red Mist, A Princess for Christmas) as Alaïs sister, Oriane Congost, a clever, devious and ambitious character, eager for power at whatever cost; and Sebastian Stan (Captain America, Black Swan) as Will Franklin, a brave, charming and passionate f riend.

Alice (Kirby) inherits a house in the South of France from an aunt she has never met; she is haunted by dreams of a woman from the past, whom she does not know; and now she stumbles upon an archaeological find that will bear witness to a genocide committed 800 years ago on European soil, which will lead Alice to the secrets of the Holy Grail. Alice had never been to this part of France, but she is driven by an inexplicable compulsion to find out the secrets of the past and of a mysterious woman who lived 800 years ago, Alaïs. What is Alaïs trying to lead her to? Why can't she shake the feeling that something monumental is at stake?

Alice knows that there are people willing to kill for whatever is behind the meaning of the labyrinth she found carved into the wall of a cave. But she must now race to find out what happened to Alaïs and how she can prevent the past from recurring. As the parallel storylines set in the southwest of France unfold, both ancient and modern-day conspiracies are unearthed, all revolving around three hidden books - The Book of Words, The Book of Potions and The Book of Numbers. Together, these tomes hold the secret of the true Grail, which dates back to the Ancient Egyptian era many years before Christ. Alaïs and those closest to her must battle to protect the secret.

From the Producers of Pillars of the Earth, comes a four-hour mini-series event that will take you on a ride through the here and now and the crusades of medieval times, but can they work together to save a 4,000-year-old secret from getting into the wrong hands Don't miss out on this exciting quest as Labyrinth arrives DVD on 1st April 2013, from Universal Pictures (UK).

UHD
A 13-year-old girl named Meilin turns into a giant red panda whenever she gets too excited in Disney and Pixar's 25th feature film Turning Red, released on DVD, Blu-ray and 4K UHD 2nd May 2022 from Walt Disney Home ... END_OF_DOCUMENT_TOKEN_TO_BE_REPLACED
Top PicksView