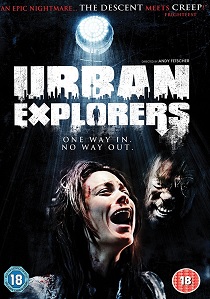 Looking for something different away from the usual well-beaten tourist trails of metropolitan Berlin, four young people - partners Denis (Nick Eversman) and Lucia (Nathalie Kelley), plus recently acquainted Marie (Catherine de Lean) and Juna (Brenda Koo) - hire local guide Kris (Max Riemelt) to take them on a tour with a guaranteed surprise. Kris leads the group into the city's dark and dank subterranean maze of wartime escape tunnels and underground fortifications on a rare and illegal, trip to visit the legendary, graffiti-laden and now walled-up Nazi war rooms rarely seen by anyone since the end of World War II.

The trip takes an initial bad turn when the group encounters a pair of confrontational neo-Nazis and their dogs prowling around, but things get much worse when an unfortunate accident leaves Kris immobile and desperately in need of medical attention. Marie and Juna set off to find help, leaving Denis and Lucia to stay behind and look after Kris. The unexpected arrival of a bedraggled looking man, Armin (Klaus Stiglmeier), provides a ray of hope. A former East German border guard and now a self-appointed "guardian" of the tunnels, Armin takes them to his base with the promise of safety and a phone call for help. However, it soon becomes apparent that Denis and Lucia have just made the biggest mistake of their young lives.

Taking the viewer on a fascinating and frightening trip into an unseen underground world, the kind of which that secretly exists beneath most vibrant cities, Urban Explorers unearths the hidden dangers and fears that lurk not only in the shadows of these unexposed landscapes but also in the darkest recesses of the mind.

BD
In a touching black and white film directed by Mike Mills, starring Joaquin Phoenix, C'mon C'mon, released on DVD and Blu-ray 28th February 2022 from Entertainment in Video, explores family, grief, and the bonds that bring us ... END_OF_DOCUMENT_TOKEN_TO_BE_REPLACED
Top PicksView