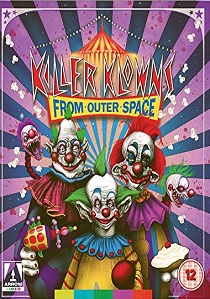 Step aside Pennywise... These Killer Klowns From Outer Space are outta this world literally! and they're packing deadly popcorn guns and cotton candy cocoons!

When Mike and his girlfriend Debbie warn the local police that a gang of homicidal alien-clowns have landed in the nearby area (in a spaceship shaped like a circus big-top, no less), the cops are naturally sceptical. Before long however, reports are coming in from other anxious residents detailing similar run-ins with the large-shoed assailants. There can no longer be any doubt the Killer Klowns from Outer Space are here, and they re out to turn the Earth's population into candy floss!

Written and produced by the Chiodo brothers knowns for their work on a host of special-effects laden hits such as Team America: World Police and the Critters movies Killer Klowns from Outer Space is a cinematic experience unparalleled in this galaxy, now newly restored by Arrow Video for this stellar edition.