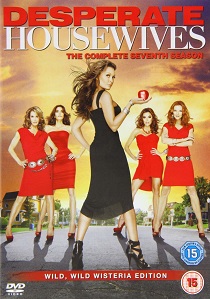 Divorce, passion, greed and murder are all in a day's work on Wisteria Lane. The housewives are back with two new surprise residents guaranteed to cause suspicion as Desperate Housewives Season 7 comes to DVD from 31st October 2011 from Walt Disney Home Entertainment.

The primetime drama with a truly contemporary take on the 'happily ever after', returns for its seventh season as it explores the complicated reality behind a group of housewives in a fictitious American suburb.

This season sees Bree (Marcia Cross) after losing her business beginning the process of rebuilding her life by telling Gaby (Eva Longoria Parker) a secret that could end their friendship; Lynette (Felicity Huffman) and Tom (Doug Savant) face a rough road ahead as they welcome a fifth child to their ever growing brood; Lynette's college 'friend' Renee Perry played by Vanessa Williams (Ugly Betty) moves to Wisteria Lane and quickly shakes up the residents. Her arrival brings a shocking secret, one which could be life-changing and Susan (Teri Hatcher) and Mike's (James Denton) financial woes have forced them to rent out their house and leave Wisteria Lane. and when Paul Young (Mark Moses) mysteriously returns to the neighbourhood as the new tenant, tensions will rise.

Follow these suburban lives as they battle through deceit, seduction and scandal to achieve domestic bliss as Desperate Housewives Season 7 comes to DVD on 31st October 2011.