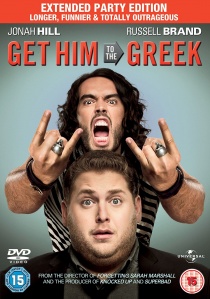 Get Him to the Greek: The Extended Party Edition (2010)

Get ready to overdose on laughter as Get Him to the Greek: The Extended Party Edition rocks onto DVD and Blu-ray on 1st November 2010 courtesy of Universal Pictures. Russell Brand injects fun and mayhem into this specially extended edition that's packed full of unbelievable extras and scenes deemed too shocking for cinema!

Reuniting Jonah Hill and Russell Brand with Forgetting Sarah Marshall director Nicholas Stoller, this is the story of a record company intern with two days to drag an uncooperative rock legend to Hollywood for a comeback concert. Get Him to the Greek, which also stars Sean "P-Diddy" Combs in his breakout comedy role, is the latest film from producer Judd Apatow (The 40-Year-Old Virgin, Knocked Up, Funny People) and is guaranteed to take you on roller-coaster of laughs.

The extended edition includes outrageous extras for your own personal comedy addiction. These include gag reels, interviews with the comedy genius' behind the film, both the theatrical and extended editions of the film and the making of Aldous Snow's hilarious music video, African Child.

Aaron Greenberg (Hill) gets things done. The ambitious 23-year-old has exaggerated his way into a dream job just in time for a career-making assignment. His mission: Fly to London and escort a rock god to L.A.'s Greek Theatre for the first-stop on a $100 million tour. His warning: Turn your back on him at your peril.

As the countdown to the concert begins, Aaron must navigate a minefield of London drug deals, New York City brawls and Vegas lap dances to deliver his charge safe and, sort of, sound. He may have to coax, lie to, enable and party with Aldous, but Aaron will get him to the Greek.

UHD
Based on the global blockbuster videogame franchise from Sega, Sonic The Hedgehog, released on DVD, Blu-ray and 4K UHD from 8th June 2020 from Paramount Home Entertainment, tells the story of the ... END_OF_DOCUMENT_TOKEN_TO_BE_REPLACED
Top PicksView