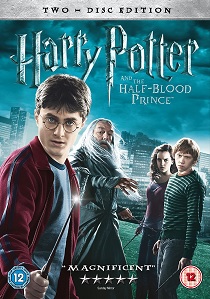 Harry Potter and the Half-Blood Prince (2009)

Wizards and muggles beware! No one is safe as Harry Potter returns for his sixth year at Hogwarts in Harry Potter and the Half-Blood Prince. Out on Blu-ray and DVD on 7th December 2009 from Warner Home Video, the entire ensemble cast is back for the sixth installment of the record-breaking franchise based on the best-selling book series by J.K. Rowling.

Yours to own and relish, Harry Potter and the Half-Blood Prince will be released as a 2-disc special edition DVD. There will also be a 3-disc Blu-ray pack that will feature the Maximum Movie Mode interactive viewing experience and a bonus copy of the film on DVD. As if that wasn't enough, fans can also look forward to the simultaneous release of Harry Potter 1-6 boxsets on both the Blu-ray and DVD formats. In Harry Potter and the Half-Blood Prince, Voldemort tightens his grip on Hogwarts as Harry and Dumbledore work to find the key to unlock the Dark Lord's defenses. But the students are under attack from a very different adversary teenage hormones. Love is in the air, but tragedy lies ahead and Hogwarts may never be the same again.

Harry Potter and the Half-Blood Prince will be available as a 2-disc DVD for £24.99 and 3-disc Blu-ray pack (x2 Blu-ray discs and 1 x bonus copy of the movie on DVD) for £28.99. Harry Potter box sets on both Blu-ray and DVD and featuring all six films released in the franchise to date will also be released on 7 December 2009.

Emboldened by the return of Lord Voldemort, the Death Eaters are wreaking havoc in both the Muggle and wizarding worlds and Hogwarts is no longer the safe haven it once was. Harry suspects that new dangers may lie within the castle, but Dumbledore is more intent upon preparing him for the final battle that he knows is fast approaching. He needs Harry to help him uncover a vital key to unlocking Voldemort's defenses--critical information known only to Hogwarts' former Potions Professor, Horace Slughorn. With that in mind, Dumbledore manipulates his old colleague into returning to his previous post with promises of more money, a bigger office...and the chance to teach the famous Harry Potter.

Meanwhile, the students are under attack from a very different adversary as teenage hormones rage across the ramparts. Harry's long friendship with Ginny Weasley is growing into something deeper, but standing in the way is Ginny's boyfriend, Dean Thomas, not to mention her big brother Ron. But Ron's got romantic entanglements of his own to worry about, with Lavender Brown lavishing her affections on him, leaving Hermione simmering with jealousy yet determined not to show her feelings. And then a box of love potion-laced chocolates ends up in the wrong hands and changes everything. As romance blossoms, one student remains aloof with far more important matters on his mind. He is determined to make his mark, albeit a dark one. Love is in the air, but tragedy lies ahead and Hogwarts may never be the same again.