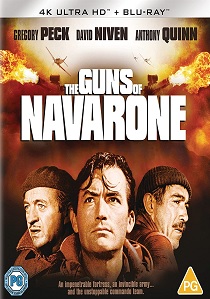 To celebrate the 60th anniversary of the acclaimed classic adventure war film The Guns Of Navarone, will be available on 4K Ultra HD and Blu-Ray for the first time!

The Guns Of Navarone follows a team of Allied Military specialists as they embark on a dangerous but imperative mission: to infiltrate a Nazi-occupied fortress and disable two long-range field guns so that 2,000 trapped British soldiers may be rescued.

Faced with an unforgiving sea voyage, hazardous terrain, and the possibility of a traitor among them, the team must overcome the impossible without losing their own lives.

DVD
One of the most compelling and conflicted characters in Sony Pictures Universe of Marvel Characters comes to the big screen as Jared Leto transforms into the antihero Michael Morbius as Morbius is released on 4K Ultra HD, Blu ... END_OF_DOCUMENT_TOKEN_TO_BE_REPLACED
Top PicksView