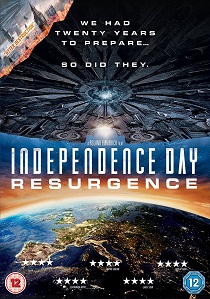 Twenty years after mysterious aliens nearly wiped out humankind, they're back with a vengeance in Independence Day: Resurgence, the explosive sequel to the original blockbuster hit, Independence Day, released on DVD, Blu-ray, 3D Blu-ray and 4K UHD Blu-ray on 14th November 2016.

Using recovered alien technology, the nations of Earth developed a vast defense program to protect the planet, led by Jeff Goldblum, returning as brilliant scientist David Levinson. But nothing could prepare us for a new invasion of unprecedented scale-and only the ingenuity of a few brave men and women can save our world from extinction.

Amazing special features include eight deleted scenes, a featurette on The War of 1996, the morning show parody. It's Early, ABQ featuring Jeff Goldblum, Judd Hirsch, and Liam Hemsworth, a gag reel, audio commentary from Roland Emmerich, the documentary Another Day: The Making of Independence Day: Resurgence, and more.

DVD
Inspired by real-events, The Serpent, released on DVD 22nd February 2021 from ITV Studios Home Entertainment, tells true story of how Charles Sobrajh, one of the most elusive & wanted criminals was ... END_OF_DOCUMENT_TOKEN_TO_BE_REPLACED
Hot PicksView