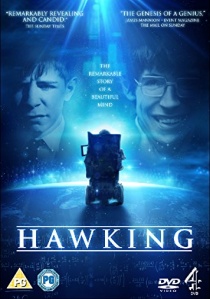 News
News Article Go back to homepage
The world's most famous living scientist Professor Stephen Hawking tells his extraordinary story in his own words for the first time when Hawking is released on DVD from 23rd September 2013, courtesy of Channel 4 DVD.
Stephen Hawking
Philip Martin
Stephen Finnigan
Channel 4 DVD
1 hour 30 minutes
23/09/2013
#Hawking
Thank you for supporting DVD365.net when you order using the link(s) below. As an Amazon Associate we earn from qualifying purchases
Buy DVD
Information

4DVD are delighted to announce the release of Hawking, an inspirational documentary brought to you by BAFTA nominee Stephen Finnigan (9/11: Voices From the Air, Supergrass, Who Stole The World Cup?, State of Terror and Brighton Bomb) and released on DVD, Blu-ray and digital download from 23rd September 2013. Hawking is written and narrated by Stephen Hawking himself and is the only official biographical account of his life chronicling his extraordinary story in his own words for the very first time.

Featuring interviews with Buzz Aldrin, Richard Branson, Jim Carrey and Benedict Cumberbatch, as well as a host of family members and close friends, the film is a celebration of Hawking's life and offers viewers unprecedented access into his captivating universe. It gives a unique insight into his world, covering his iconic career and struggle with Motor Neurone disease. His personal journey is one of triumph, having been diagnosed with the disease in 1963 and given two years to live, he has gone on to make incredible scientific discoveries and become the world's most famous living scientist.

Exclusive to the DVD, Blu-ray and digital download are fantastic extras including, a personal message from Stephen Hawking, and a commentary from producer Stephen Finnigan which gives viewers insight into how this extraordinary film came together.

Stephen Hawking has captured the imagination of millions across the world. Join one of the world's greatest minds as he invites you into a personal journey through his life, available to own on DVD and digital download from 23rd September 2013.

BD
A 13-year-old girl named Meilin turns into a giant red panda whenever she gets too excited in Disney and Pixar's 25th feature film Turning Red, released on DVD, Blu-ray and 4K UHD 2nd May 2022 from Walt Disney Home ... END_OF_DOCUMENT_TOKEN_TO_BE_REPLACED
Top PicksView