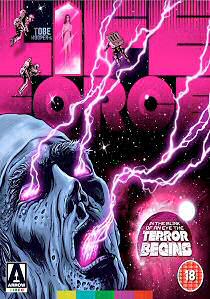 Arrow Video is pleased to announce the highly anticipated deluxe Blu-ray & SteelBook editions of Tobe Hooper's cult sci-fi classic Lifeforce. The restored Blu-ray discs will be released in the UK on 30th September 2013 marking the first time that the movie will be available on this format in the UK.

The carefully restored Blu-ray will also feature an extensive amount of extra features and boasts a restoration of the movie that was overseen by director Tobe Hooper himself.

Originally released back in 1986, Lifeforce was directed by American horror maestro Tobe Hooper, hot off the heels of his previous horror hit, Poltergeist. Perhaps Hooper's most famous movie was his 1974 classic The Texas Chain Saw Massacre, a film which forever changed the horror genre. Known for pushing the envelope, for his 1986 release, Lifeforce, Hooper decided to adapt Colin Wilson's edgy novel The Space Vampires and in doing so, created a horror/sci-fi epic with a devoted cult following.

Keeping with what is a now a fan-favoured tradition of Arrow Video restorations, Lifeforce will come complete with a reversible sleeve for the standalone Blu-ray version which will feature the original artwork and a stunning new illustration.

When a space shuttle crew finds a mysterious spacecraft containing three human-looking creatures in a state of suspended animation, they bring them back to Earth for further investigation.

It's only then that scientists discover that they are in fact a race of space vampires that feed off people's life-force rather than their blood. So when they escape and run amok in London, the consequences are apocalyptic - and the shuttle crew's only survivor (Steve Railsback) seems to be the only man who can stop them.

Based on Colin Wilson's novel The Space Vampires, co-written by Dan O'Bannon (Alien, Return of the Living Dead) and directed by Tobe Hooper (The Texas Chain Saw Massacre, Poltergeist), this lively sci-fi horror romp has a stellar cast including Peter Firth, Frank Finlay and Patrick Stewart - although it's Mathilda May's appearance as a naked female alien that attracts most attention to this day.

DVD
When the world is locked down, they'll find their ticket out in Locked Down, released on DVD 7th June 2021 from Warner Home Video. END_OF_DOCUMENT_TOKEN_TO_BE_REPLACED
Top PicksView