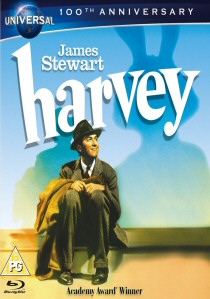 For the first time ever, one of Hollywood legend James Stewart's most personally significant roles is released on Blu-ray as Harvey debuts on 10th September 2012 from Universal Pictures (UK). Digitally restored from high resolution film elements in perfect high-definition picture and perfect high-definition sound for the first time ever, accompanied by an array of bonus features including two featurettes on 100 Years of Universal and an introduction by Stewart.

Harvey has been acknowledged by the American Film Institute as #7 on "10 Top 10" for the Fantasy genre and #35 on "100 Years... 100 Laughs" and deserves to sit alongside It's a Wonderful Life and Mr. Smith Goes to Washington as the definitive James Stewart film. Directed by Henry Koster and also starring Academy Award® winner Josephine Hull, Charles Drake, Academy Award® nominee Cecil Kellaway and Peggy Dow, Harvey was nominated for two Oscars® in 1951 including Best Actor for James Stewart. Josephine Hull won the only award on the night taking home Best Supporting Actress.

The film was adapted from the play by Mary Chase, which won the Pulitzer Prize for Drama in 1945 and ran on Broadway for 5 years and 1,775 performances. To keep the film version close to the play, director Henry Koster enlisted Mary Chase to help write the screenplay and cast most of the original actors from the play, including Josephine Hull, who plays Elwood P. Dowd's sister.

James Stewart gives one of his finest performances in this light-hearted film, based on the Pulitzer Prize-winning play. Stewart stars as the good-natured Elwood P. Dowd, whose constant companion is Harvey, a six foot tall rabbit that only he can see.

To his sister, Veta Louise, Elwood's obsession with Harvey has been a thorn in the side of her plans to marry off her daughter. But when Veta Louise decides to put Elwood in a mental hospital, a hilarious mix-up occurs and she finds herself committed instead. It's up to Elwood to straighten out the mess with his kind philosophy and his "imaginary" friend, in this popular classic that features a Best Supporting Actress Academy Award winning performance by Josephine Hull.