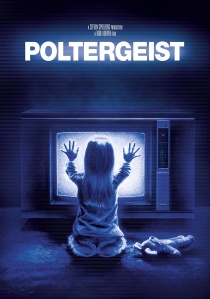 They're heeere! Warner Home Video is proud to present the newly remastered and restored Poltergeist 25th Anniversary Edition, available on DVD for the first time on 15th October 2007. A box-office success at the time of its release in 1982, Poltergeist was one of the most influential horror films of its generation and was nominated for three Academy Awards® including Best Original Score, Best Sound Effects Editing and Best Visual Effects.

Suburbanites Steve (Nelson) and Diane (Williams) suddenly experience paranormal activity in their home. What begins as minor excitement quickly turns into nasty ghostly encounters. The disappearance of their daughter Carol Anne (O'Rourke) forces the Freelings to bring in parapsychologists and a professional exorcist to exorcise their home. Directed by Tobe Hooper and featuring Oscar Nominated Visual Effects by Richard Edlund, Michael Wood and Bruce Nicholson, Poltergeist is one of the most entertaining horror films of its time.

DVD
Will Smith and Martin Lawrence are back on the case in the roles that launched the dynamic duo to global superstardom in Bad Boys For Life, arriving on DVD, Blu-ray and 4K UHD 25th May 2020 from Sony ... END_OF_DOCUMENT_TOKEN_TO_BE_REPLACED
Hot PicksView