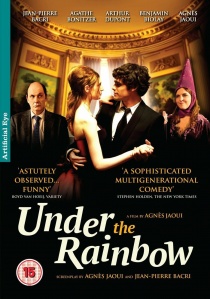 Laura has spent her whole life waiting for Prince Charming. So when Sandro appears at a party, exactly like her Prince would in her dreams, she thinks she's finally found her knight in shining armour. But when she meets Maxime the following night, Laura starts to wonder if some Princes could be more charming than others... Will everything end happily ever after for Laura? Or will the prince turn out to be the frog?!

A witty, charming and effervescent comedy of manners and errors from Agnès Jaoui (The Taste of Others, Let's Talk About the Rain), this modern take on the romantic fable is a smart, snappy and ultimately affecting drama that beautifully melds the cynical with the wistful.

Directed by and starring Agnès Jaoui along with Jean-Pierre Bacri, Agathe Bonitzer and Arthur Dupont, the bittersweet French comedy Under the Rainbow is released on DVD on 11th August 2014 courtesy of Artificial Eye.