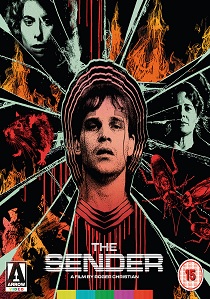 Your dreams will never be the same.

After an unsuccessful suicide attempt, an amnesiac young man (Zeljko Ivanek, Hannibal) is labelled "John Doe #83" and admitted to a psychiatric hospital for evaluation. Dr Gail Farmer (Kathryn Harrold, Modern Romance) tries to establish a connection with him, but soon begins to experience frightening hallucinations. She quickly realises that the cause of these waking nightmares is none other than the mysterious John Doe, and the strange woman (Academy Award nominee Shirley Knight, The Dark at the Top of the Stairs) who visits the hospital claiming to be his mother...

Hailed by none other than Quentin Tarantino as his favourite film of 1982, and boasting an virtuoso early score by Trevor Jones (The Last Of The Mohicans), The Sender is a stylish precursor to the "rubber reality" dream-logic special effects seen in films like the A Nightmare on Elm Street series, but retains a horrific power of its own.

The Sender is released on Blu-ray 17th June 2019 from Arrow Video.