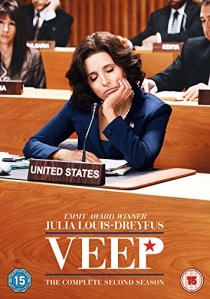 It's midterms in the White House and we're back with our Vice President and her long list of not-so- important duties. Join Emmy® award winner Julia Louis-Dreyfus as Selina Meyer and witness her hilarious escapades in Veep: The Complete Second Season; released on Blu-ray and DVD on 2nd June 2014 from HBO Home Entertainment. The full season and episodes are also available to own and watch instantly on Amazon Instant Video, blinkbox and Google Play.

Created by Academy Award® nominee and BAFTA® winner Armando Iannucci (The Thick of It), Veep: The Complete Second Season is an up close and politically (in)-correct look at the daily successes and disappointments of being second in command.

Following on from the highly successful first season, the second begins with midterm elections looming. Vice President Selina Meyer is scoring higher ratings than the President in several popularity polls, which she hopes will boost her influence and help her curry favour with the Chief Executive. But despite her best intentions, even the most banal actions can set off unexpected and often disastrous consequences.

Her staff - an ensemble cast The Washington Post calls "terrific" including Tony Hale (Arrested Development, Emmy® winner for his role in Veep), Anna Chlumsky (In The Loop, Emmy® nominee for her role in Veep), Matt Walsh (Hung), Reid Scott (My Boys), Timothy Simons (Days Together) and Sufe Bradshaw (Overnight) - are close at hand with a laugh-out-loud combination of personal problems and government-insider antics.

With two new cast members in the second season, Meyer has even more to deal with. We're introduced to the President's sensitive and often depressed Chief of Staff, Ben (Kevin Dunn; True Detective, Transformers) who spends most of the time escaping to the supply closet when things get a bit overwhelming. Gary Cole (Suits, The Good Wife) plays Kent Davison, a number cruncher who is determined to get in the way of Selina's expanding role in the White House.

For fans of other comedies Curb Your Enthusiasm, Eastbound and Down, Alan Partridge and The Thick Of It, make sure you catch Veep: The Complete Second Season when released on Blu-ray and DVD on 2nd June 2014.

DVD
In Brian And Charles, released on DVD and Blu-ray 10th October 2022 from Mediumrare, an inventor lives alone in a remote village in the countryside, inventing useless things out of found objects in his garage. That is until ... END_OF_DOCUMENT_TOKEN_TO_BE_REPLACED
Top PicksView