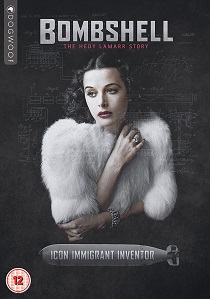 Hedy Lamarr was iconic. A Hollywood star known as 'the most beautiful woman in the world', she inspired both Snow White and Catwoman with her striking looks and distinctive persona. Bombshell: The Hedy Lamarr Story, available on DVD and VOD from 23rd April 2018 courtesy of Dogwoof, explores the real woman behind the glamour.

As famous for her performances as she was infamous for her multiple marriages and affairs with the likes of Spencer Tracy and JFK, Hedy Lamarr (Ziegfeld Girl, Samson and Delilah) was enigmatic. There was substance behind the beauty, though; a side to her far more interesting than the spotlight of stardom. She was a maverick, an ingenious inventor whose pioneering work helped revolutionise modern communication. Her groundbreaking concept of frequency hopping is now used as the basis for secure Wi-Fi, GPS and Bluetooth. We have far more than beautifully poised performances to thank her for.

Experience Hedy Lemarr in her own words and discover the magnificent woman that is finally getting the credit she truly deserves as an icon and inventor, when Bombshell: The Hedy Lamarr Story releases on home platforms.