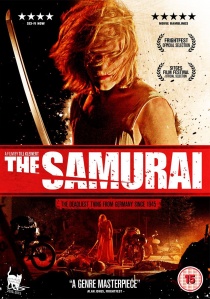 NewsHorrorThriller
News Article Go back to homepage
The Samurai, released on DVD by Saffron Hill on 13th April 2015, is a German thriller in which a young police officer called Jakob tries to uncover the truth behind recent events plaguing his small, remote village.
Pit Bukowski, Michel Diercks, Uwe Preuss, Ulrike Hanke-Haensch, Kaja Blachnik
Till Kleinert
Saffron Hill
1 hour 19 minutes
13/04/2015
#TheSamurai
Thank you for supporting DVD365.net when you order using the link(s) below. As an Amazon Associate we earn from qualifying purchases
Buy DVD
Information

One day he receives a package addressed to the Lone Wolf. The phone rings and a mysterious voice asks if the package has arrived, and demands it is brought to him right away. Intrigued, Jakob goes to a dark house in the middle of the woods to find a man (Pit Bukowski) wearing a wedding dress and waiting for the ancient samurai sword hidden in the parcel. Who is this debauched maniac and what does he want?

Till Kleinert's ruthless rural horror pulsates with relentless intensity. An official selection at the Tribeca Film Festival and Film4's Frightfest, The Samurai is a daring, outrageous and fascinating journey into the sexual heart of darkness.