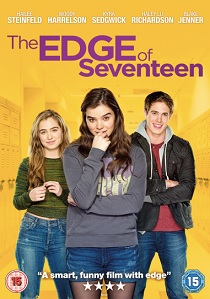 Experience teenage life as never before in the hilarious and heartfelt critically acclaimed comedy, The Edge of Seventeen, coming to DVD on 27th March 2017 from Entertainment One.

The Edge of Seventeen is an honest and hysterical look at what it's like to grow up as a young woman today. Nadine (Steinfeld) and Krista (Haley Lu Richardson, Ravenswood) are inseparable best friends attempting to navigate high school together. But then Nadine's world gets turned upside down when she finds out that Krista has been secretly dating her popular older brother (Blake Jenner, Glee) behind her back.

Now with her best friend as her worst enemy, Nadine has to deal with being an awkward loner, while discovering that what may feel like the end of the world is really just the beginning of growing up.

BD
From the Wachowski brothers and Joel Silver, the masterminds behind The Matrix trilogy, comes another intriguing, action-packed fantasy-thriller in V for Vendetta, released on 4K UHD 2nd November 2020 ... END_OF_DOCUMENT_TOKEN_TO_BE_REPLACED
Hot PicksView